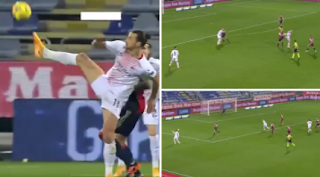 The 39-year-old Zlatan Ibrahimovic showed off his ageless skills for AC Milan with a unique first touch, turn and no-look pass against Cagliari.

The super Swede had already put his side 1-0 up from the penalty spot when he picked up the ball just outside the opposition area.

Nothing looked on – but this is Zlatan. So of course he flicked the ball up into the air, spun and kung-fu kicked it with the outside of his boot. The ball went straight into the path of teammate Diogo Dalot as he ran towards the box.

It was an amazing piece of skill and gymnastic dexterity that belied the fact that Zlatan turns 40 years old later this year. This man simply does not age.

His work for the night wasn’t finished there, either. In the second half, Ibra sped through onto Davide Calabria’s long pass, controlled it and slammed the ball into the net to make it 2-0 to Milan.

A sensational sight – unless, presumably, you are a Cagliari player who’s just realised that a 39-year-old has decimated your offside trap.

That brace at the start of a new year also meant Zlatan has now scored in a 23rd consecutive year in professional football. That’s longer than Kylian Mbappe has been alive.

The 2-0 win for Milan meant they re-established their three-point lead over city rivals Inter Milan at the top of the Serie A table.

It’s a largely unexpected title challenge from the Rossoneri. But it’s been inspired by Zlatan, who’s been in sensational form since he returned to Italy from two years in MLS with LA Galaxy.

The old lion has 13 goals in 13 games in all competitions this season – and an amazing 12 goals in just eight Serie A games.

Plus there are special pieces of playmaking skill, such as the one we saw on Monday. Another to add to the bulging – and magnificent – Zlatan scrapbook.

I genuinely think Zlatan has more tech than cr7 and I’ll die on that hill https://t.co/OvWT3DIhL1