On this episode, Marcus Owolabi hosted Uk based Nigerian actress and filmmaker, Yvonne Hayes, as a guest on Love, Sex & Relationship.
She shared her view and opinion on why people cheat and it’s quite interesting.

“Your Boyfriend Doesn’t Love You, If He Doesn’t Give You Head” – BabyJoy Says

All is not well between Frankie Just Gym It and his first baby mama, Maureen Waititu.

Claims are rife that Frankie’s mom, who happens to be Maureen’s former mother-in-law asked her to move out of her house that had been an agreement between the two parties after siring two boys with her son, Frankie.

However, it has been rumored that Maureen barred Frankie from seeing his two sons lately and thus why the two parties are now in a battle.

To which the mother of two responded saying;

‘I have not barred him (Frankie) from seeing his kids. My lawyer contacted him through a letter for a round table mediation to come up with a structure and order on how to raise the kids. But he made it very clear he has no obligation to respond to that.’

Following the recent developments, Frankie’s mother had allegedly asked Maureen to move out of her house in Westlands where she has been living with the boys.

“Frankie called me and told me that his mother and brother said I move out,” revealed Maureen.

A house the Internet sensation had tirelessly worked on to refurbish so as to create a conducive environment for her kids to live in but now, she is crying foul.

When reached out to comment on the same by a local publication, Frankie responded;

‘I cannot comment on this matter because it is a personal issue and it has nothing to do with anyone. I don’t want to comment on any of these to be honest.’

The fitness coach completely declined to even shed light about claims that he is a deadbeat father to his children.

We can only hope for the best. 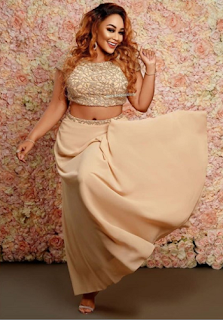 Zari Hassan has found true love in Ghanaian actor Fred Nuamah following leaked screenshots of their love confessions for each other.
The two raised eyebrows online after publicly exchanging romantic words starting with a long love letter from Fred to a dear Zari who then acknowledged his heartfelt feelings for her and sweetly responded back.
Sharing a series of photos of the Ugandan socialite as seen by Ghafla, the film star started by gushing over Zari’s exceptional beauty, confessing just how she showed him the best version of true love; a lady who has always been his dream girl.
For Fred, he had already visualized her vision, having spent numerous days thinking of how best he would make her birthday special because her happiness is his happiness.
He recalled how they met through a phone call courtesy of a friend, Eddie and that is when he found a reason to continue living. “Ur life began on this day. My life began the day we spoke. I’m so glad both days happened. Kipenzi cha roho!” he sweetly penned.
“Mamayao …let me use this letter to validate all my love for u,” he continued. Disbelieving that it was possible to love someone so deeply yet fully, but she proved him wrong and today, they celebrate the special bond of love they share.
“Most importantly, I love the way u complete me. You are my the soul mate I tot I’d never find. U cheer me up when I’m down and help me find balance when my world is out of control. U make me want to do the same for u,” the letter continues.
Romantic chats that have since raised speculations of an untold love that finally spread its wings and got the courage to fly as fans conclude that Zari’s King bae has finally been unmasked. 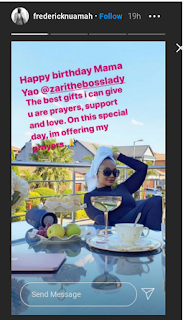 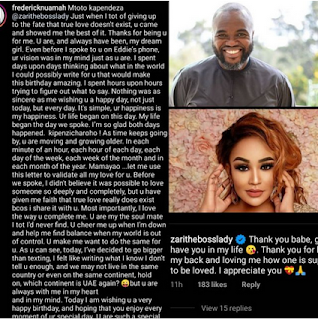 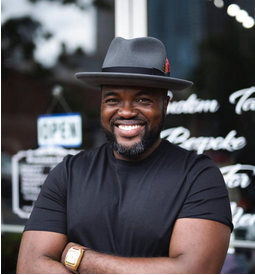 Nollywood actress Bukunmi Oluwasina has finally walked down the aisle with her man.

The actress who gushed about her man in her Instagram post, disclosed that they dated for 11 years before getting married. Bukunmi also promised to love him no matter what comes their way.

LOVE IS PATIENCE, FORGIVENESS, NEVER GIVING UP, And above all, it’s not just about buying a woman all the luxuries in the world, but about making her happier and more relaxed than a woman who has all the luxuries in the world. I remember 2010, when we were leaving.. And I told u to give me something to hold, to always remind me of you. Then u gave me your wine wristband.

I told you I would keep it forever and maybe wear it on our wedding day. You laughed and said… “That’s if we don’t end up breaking up when we enter UNIVERSITY, and you start meeting better guys” It’s 11 years now, and I have met a lot of men like you said…but haven’t, and will never stop choosing you over EVERYONE. I remember when I told you I was going to study Theatre Art you never liked i.

But you know how much I love it… till you came to like it too, just to see me happy. I don’t even see the need to call people for screenplays, cos your contributions to my story constructions always help me get the perfect stories for most of my movies that earned me Awards. Thank U for always supporting and standing by me, And watch me grow even when nobody knew me, till now. I still wonder how a day never passed that you wouldn’t call me for the past 11 years. Even if you just saw me 2hour ago, Even when we fight, you would still call..” Have U eaten? Where are U?”. You know how you make me feel sometimes??

Like THE ONLY GIRL IN THE WORLD. Just like your name, You are a Gift to me. My dad once said, “The day we learn how to fix a thing when it’s broken, instead of throwing it away and buying another, is the day we would learn the secret of an unending happy marriage” Thank you for the endlessly holding on. And I want you to know that whenever I tell you “I love you too”, I hope you know what I mean? I MEAN I LOVE YOU MORE THAN ALL the fights we would still have, All the things people would still say, All the mistakes we would still make, All the sidechicks that may still cross our lane, Both in good and bad days… I love you whichever way. And FOREVER ISN’T EVEN LONG ENOUGH 4ME TO SHOW YOU HOW LONG I WANT TO LOVE YOU. ..MY TREASURE.. MY BEST FRIEND
Cheers to FOREVER 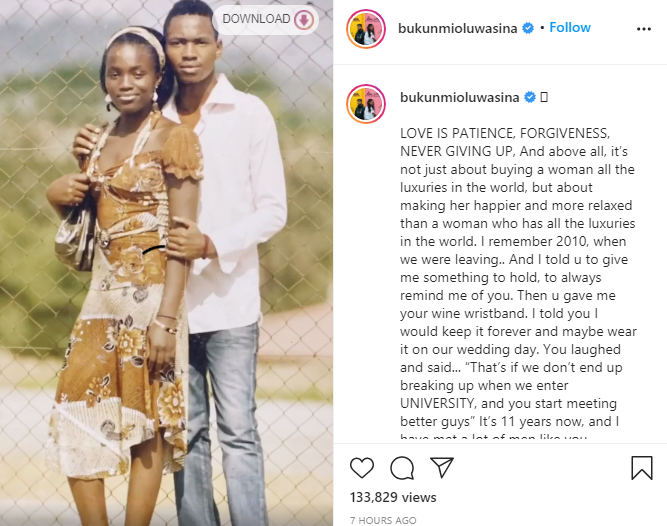