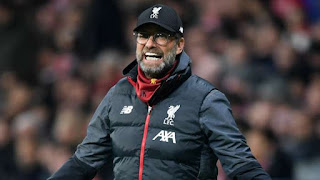 Liverpool stormed to their first league title in three decades last season, finishing 18 points clear of Manchester City after being crowned champions with a record-breaking seven games left to spare.

After failing to win a single piece of silverware during his first three seasons at Anfield, Klopp has managed to deliver four trophies in the space of two years, including the Champions League and FIFA Club World Cup.