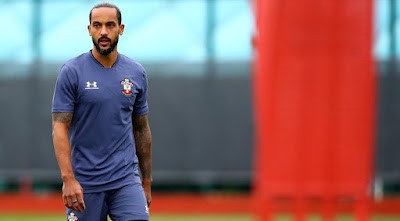 Stuart Armstrong and Moussa Djenepo will miss Southampton’s Premier League trip to Chelsea on Saturday but manager Ralph Hasenhuettl sees this as an opportunity to hand deadline day signing Theo Walcott his debut at Stamford Bridge.

Midfielder Armstrong tested positive for Covid-19 while on international duty with Scotland and will complete his 10-day isolation period on Friday.

“He cannot train with us and has been in quarantine,” Hasenhuettl told reporters on Thursday. “It’s a pity that he is out now. Nobody else has tested positive and we are all fine.

“I hope he is back in on Friday and then Saturday, so that he can be an option for next weekend.”

Meanwhile, Malian winger Djenepo, who scored his first league goal in over a year in Southampton’s 2-0 win over West Bromwich Albion last time out, picked up a hamstring injury in the same match.

“There is always a push back every time he makes a step into the team, and this is a problem for us,” Hasenhuettl added.

“With all the injuries we have in the number 10 position, with Stuey out and Moussa out, Theo has more chance to play on the weekend.”

Everton loanee Walcott has returned to his boyhood club on a season-long deal and will look to resurrect his career after struggling for first-team opportunities under Carlo Ancelotti at Goodison Park.

“With Theo, we know about his history at the club,” said Hasenhuettl.

“If you have the chance to get such a player in here who is still hungry, who still wants to learn, who has quality without a doubt… it is definitely a player that makes us better.”

Southampton are 11th in the standings with six points, while Chelsea are seventh with seven points after four games.

Official Dj Splash Celebrates His Fiancee On Her Birthday