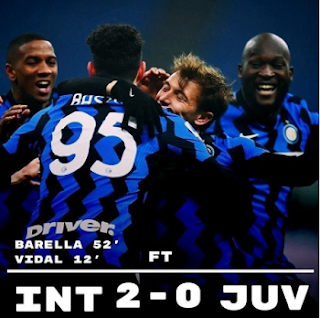 Antonio Conte guided Inter Milan to victory against his former club Juventus as the Nerazzurri moved level on points with AC Milan at the top of Serie A.

Arturo Vidal’s headed first-half opener was his first top-flight goal in Italy for almost six years, having last scored for Juventus in May 2015.

Nicolo Barella, who created the first, made it two with a fine run and finish.

Champions Juventus were lacklustre at the San Siro and remain fifth.

Andrea Pirlo’s side are seven points adrift of the two Milan clubs and AC Milan can edge clear at the summit again if they win at Cagliari on Monday.

Conte, who guided Juve to three Serie A titles between 2012 and 2014 to begin the Turin club’s run of nine successive scudetti, had failed to beat his former club in two previous attempts since taking over at Inter in 2019.

The resounding victory against a side they had failed to beat in more than four years boosts their hopes of winning the league for the first time since 2010.

Vidal, who won the Serie A title in each of his four seasons with Juventus between 2011-12 and 2014-15, was clinical with his first-half header from an excellent Barella cross.

Juventus were subdued in response, with Serie A leading scorer Cristiano Ronaldo unable to impose himself on a match that Inter could have won more easily.

Apart from an early Ronaldo effort that was rightly disallowed for offside, and a fierce shot from Federico Chiesa late on that Samir Handanovic did well to save, they were rarely troubled.

For Inter, Lautaro Martinez and Romelu Lukaku were guilty of spurning chances.

Barella, however, was more decisive with his finishing, running onto a Alessandro Bastoni ball from defence before finding the top corner and sealing victory.