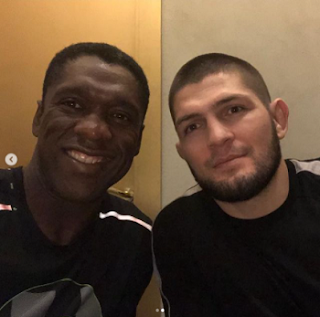 Khabib Nurmagomedov is slow and methodical inside the Octagon but that doesn’t mean he hasn’t got some serious speed in his locker.

The UFC lightweight champion, 29-0 in MMA, has been over in Dubai as he enjoys retirement from MMA and was recently filmed playing football with AC Milan and Ajax legend Clarence Seedorf, his late father’s favourite player.

The two were playing against Turkish chef Burak Özdemir, aka CZNBurak, in a big eleven-a-side game.

And, ‘The Eagle’, wearing his UFC/Reebok shorts and Asics running trainers, has gone viral after one clip in particular started doing the rounds.

The Dagestani fighter, a staunch Real Madrid supporter, knocked the ball past Burak down the left flank and demonstrated some ridiculous pace to burn. The video really shouldn’t be that funny but we can’t stop watching.

Some highlights from the match, including a Seedorf free-kick, have been posted by CZNBurak.

It looks like Khabib’s arch-rival Conor McGregor has some competition when it comes to ranking UFC stars by their footballing ability.

‘The Notorious’, who grew up a Manchester United fan and played a lot of Sunday League, showed off his skills in July and had a social media exchange with Real skipper Sergio Ramos.