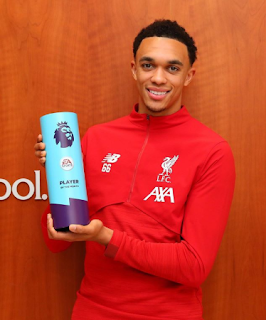 Trent Alexander-Arnold has today been named the Premier League Player of the Month for December.

The full-back’s outstanding form during the final month of 2019 was rewarded with the accolade at Melwood on Friday.

A productive December saw Alexander-Arnold chalk up one goal and three assists, as well as helping Liverpool keep four clean sheets as they won each of their five fixtures in the division to maintain a 13-point lead at the summit.

It ensured the trophy remained at Melwood after Sadio Mane won November’s edition of the honour.

Singer May D Celebrates His Swedish Wife On Her Birthday

19 -Year-Old English Instagram Model, Chloe Davison Kills Herself For Not Getting Enough Likes

AFCON2019: Lady Hiding After Realizing Camera Was On Her During South Africa Vs Nigeria Match

The Chancellor of Ahmadu Bello University, Zaria and Obi of Onitsha, Igwe Alfred Achebe has waded into the crisis over…