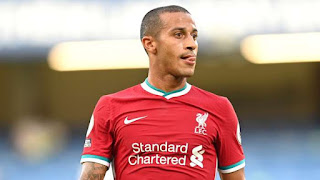 Jose Enrique has described Thiago Alcantara as a “phenomenal player” and backed Liverpool’s new “magician” to be the signing of the season.

Liverpool bought Thiago from Bayern Munich for £20 million ($26m) on September 18, tying him down to a four-year contract.

The former Barcelona playmaker has won 24 major trophies over the course of his career, including two Champions League crowns, the second of which he picked up with Bayern in 2019-20.

Buhari, Osinbajo To Spend ₦3.4 Billion On Feeding, Travels in 2021