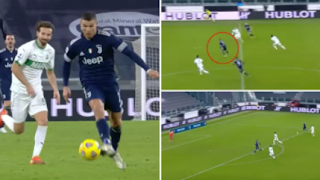 Cristiano Ronaldo reached another historic milestone in his incredible career last night when he became the joint highest-goalscorer in football history.

After goals from Danilo and Aaron Ramsey either side of a Gregoire Defrel equaliser for the hosts, the Portuguese superstar struck in the 92nd minute to seal a 3-1 win for Juventus over Sassuolo and in doing so, moved level with Czech Republic legend Josef Bican on 759 goals.

Ronaldo sprinted in behind late on and supplied an emphatic finish for his 15th Serie A goal of the season so far, but more importantly the strike means he is just one away from becoming the all-time leading goalscorer in history.

The five-time Ballon d’Or winner surpassed Brazilian legend Pele’s tally of 757 last week when he bagged a brace in a 4-1 win over Udinese – though the 80-year-old is probably going to dig up some goals he scored in the park back in the 1950s and count them on his record.

The Santos icon caused a stir after claims he had changed his Instagram bio in response to Ronaldo moving ahead of him but later issued a statement saying it was not the case.

Ronaldo took to Instagram following on from his record-equalling goal, saying he was “happy to have made my contribution”.

Here is how the rankings look after Ronaldo’s goal: