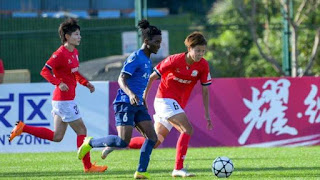 The Malawian continued her fine form as her side reached the final four-team event, with Friday’s win over Guangdong Meizhou Huijun

Temwa Chawinga increased her goal tally as her header powered Wuhan to a 5-0 victory over Guangdong Meizhou Huijun in a Chinese Women’s Super League encounter on Friday.

After Tuesday’s 3-1 comeback win over Shandong Sports Lottery, Wuhan entered the tie sitting at the top of the log but aimed to wrap up their first-round campaign on a high against Guangdong.

In Shangdong’s win, the Malawi international helped Wuhan complete a comeback as she scored the second goal of the match – her fifth of the season for her Chinese side in eight outings.