As the world continues to shift from the traditional CD distribution of music, online streaming has become the surest way for artists to earn money from their sweat and Intellectual property, and 2 billion streams is no mean feat.

Wizkid currently ranks 129th on the Spotify artists chat, the highest for any African artiste since the platform was founded in 2006.

Davido’s album hits 1 billions streams online and he shows of the award saying it has never been done before in Nigeria. A follower attacks him for making the victory sound like a competition and Obama who shared the good news was quick to respond.

Sensational Nigerian singer Mr Eazi has lamented over the little amount of revenue generated from streams of hit songs .

Mr Eazi who didn ’ t state the song that generated the millions of streams, however , revealed that the revenue generated from the stream was way less than the amount expected .

According to Mr Eazi the song which had 10 million streams was only able to generate $ 5000 .

Taking to his social media page to lament over the amount generated from the song.

Looking at this 10million streams on this song on this platform amazing how that translates to less than $ 5000 in revenue ! Magic Stuff !! Thus is the story of the hit song lol

Brymo Thanks Fans As His “Yellow” Album Receives Massive Streams From The US, Ghana, The UK, And Canada

Nigerian sensational singer, Brymo has thanked his international fans for their continuous love and support towards his recently released album “Yellow”

The singer who dropped his 7th body 0f work “ Yellow ” a few weeks ago made the news on several occasions for his controversial statements. The critically acclaimed project has been receiving massive streams not just in Nigeria but in other parts of the world. Brymo took his Twitter page to reveal that he has received the most streams from The US, Ghana, The UK, and Canada

The singer thanked them for their l0ve and support but maintained that Nigeria remained the country with the highest number of streams. He wrote: The US, Ghana, The UK, and Canada in that order are the 2nd-5th places where I’m being streamed the most… At the moment the home crowd continues to outplay everyone…. thank you for tuning in guys, I love you all.

Ace Nigerian producer Don Jazzy took to his Instagram page to mimic popular comic actor Mr Macaroni and the video is quite hilarious.

If you recollect, Don Jazzy had earlier informed his followers that he is now a full blown influencer and revealed he would soon linkup with comedian, Mr. Macaroni, to enable him learn his crafts so as to diversify his income streams.

Sequel to his new decision, Don Jazzy took to his official Instagram page on Saturday evening to wow his fans and followers by posting a video of himself accurately mimicking the fast rising Nigerian comedian, Mr. Macaroni.

Clad in Mr. Macaroni’s kind of “agbada” attire, the producer shared the video with his over 8 million Instagram fans.

In the video, he could be heard saying;

Moments later, a female voice could be heard asking;

“Daddy Wa! What are you doing here?“.

He hysterically replied “water and garri“.

Chike’s “Boo Of The Booless” Gains Over 10 Million Streams

Despite the fact that he is an independent artiste and he released his LP without a music visual the album has remained at the upper echelon of the charts and has been hailed as an instant classic spawning a number of digital and radio hit singles.

The album which boasts features from M.I Abaga, Ric Hassani and Zoro has amassed over 10 million streams in barely 2 months. Chike took to his social media to make the announcement and proclaimed it as a cause of celebration.

Check his post below and get the album too.

Barry Jhay’s album has crossed the 10 million mark across all streaming platform.

The Barry Back Album was released two months ago and has been able to garner a large amount of streams on many of the platforms.

“Barry Back got over 10 Million streams on all platforms in less than 2 month, I appreciate you guys for your love and support, Retweet if you love this EP”

Justin Bieber’s spiritual journey has been out in the open for a while now. And as the coronavirus pandemic escalates and the world self-isolates, the singer is seeking solace with the help of his faith.

The Baby crooner had spent most of his Monday making music but decided to pause for a while to renew his faith in God by watching and streaming church service online so his fans could join in.

Following the end of the stream, the singer shed some light on his views on religion and how he is more open towards people from different faiths but still clings on to the firm connection he has with Christianity.

“Hope you guys enjoyed that as much as I did … If you guys watched that and you don’t believe in the story of Jesus or whatever it may be, super OK. Everyone’s on their own journey, their own faith journey. I just feel like in this time that the story of Jesus really resonates to me,” he said.

Bieber has been attending the Hillsong Church which began from Australia, and has now been streaming the sermons online following the COVID-19 outbreak.

Burna Boy Blocks Lady on Twitter For Calling Him An Hypocrite and Reminding him about his Rants Last year where he called Streaming “Joke thing” Just Moments After He finished Bragging about Having 600million streams!!! 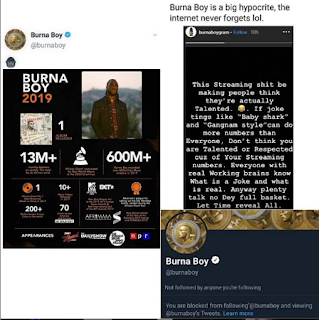 Nigerian singer, Burna Boy has blocked a lady who reminded him of a 2019 tweet he posted on streaming numbers.

The singer had yesterday taken to social media to boast of his current achievements with his latest works. He had boasted of his more than 100 million streams across different platforms and how his latest song with Ed Sheeran is doing well in the United Kingdom.

It didn’t take long for a Twitter user identified as Enitodun to remind him of his rant mid-last year when the singer stated that streaming numbers do not reflect a singer’s “true worth or talent” and “no one should get carried away by them.”

“This streaming … be making people feel like they are actually talented. If joke things like “Baby Shark” and “Gangnam Style” can do more number than everyone, don’t think you are talented or respected because of your streaming numbers.

“Everyone, with real working brains knows what a joke is and what is real. Anyway, plenty talk no dey full basket. Let time reveal all,” Burna Boy’s post read at the time.

Nigerians on Twitter said the musician was simply taking a jab at his colleague, Mayorkun, who had before then shared his achievement of attaining 70 million streams across different platforms hours earlier.

Well, fast forward to today, Burna Boy blocked the lady for reminding him of the 2019 rant.

“I have the highest female artist streams, so much international recognition”- Yemi Alade shows gratitude 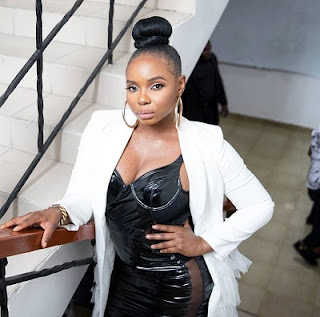 Popular female artiste, Yemi Alade has taken out time to thank God for lifting her up, despite the hate comments constantly fired at her on a daily basis on Twitter.

Yemi Alade, fondly called “Woman of Steel” took to her Twitter page just few hours ago to state that, although her achievements and power moves are usually overlooked by her Twitter haters, God still finds a way to bless her more.

“I don’t know how I Have been doing it on these Twitter streets of hate and but it’s so obvious more than ever before with so much international recognition, endorsements, highest female artist streams on Spofity etc, that GOD ISNT DONE IN MY LIFE.” 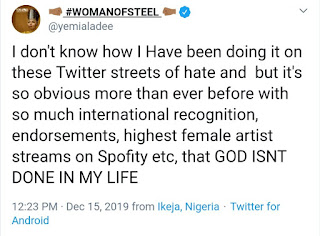 The current season is largely decisive for Juventus Turin. The team has long proved all it could in the domestic arena, and it has a good chance of a final triumph in the Champions League. Football streaming www.1xbet.com offers a great opportunity to keep abreast of events and earn regularly thanks to your own knowledge.

This summer the Old Signora bought acquired Cristiano Ronaldo especially for this goal; he quickly managed to become one of the leaders of the team. The Portuguese fits perfectly into the team’s tactics, at the same time he managed to become one of the main scorers in Serie A. The Champions League has not been so successful for him, and Ronaldo managed to score only once. However, there is the playoff round ahead, where he will have time to show his skills. At betting live site, you can make a forecast for team’s performance in all tournaments.

Since Bianco Neri has already managed to secure a comfortable gap from rivals in Serie A, they can pay even more attention to the Champions League. 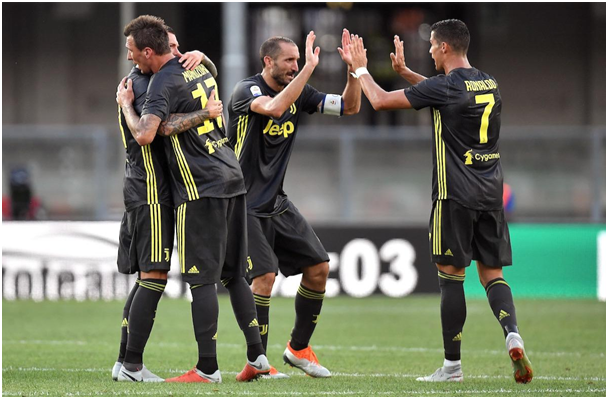 Already at the 1/8 of the final stage, Juventus had a tough opponent, Atletico, which means that we can expect an exciting match, which you can bet on at the office of the reliable bookmaker. There is also the section of the tennis streaming https://1xbet.com and many other sports.

Allegri’s team rightly considered one of the main favorites of the current tournament. There are several reasons for that. For example:

1.     Experience. Over the past 4 seasons, the team has twice played in the Champions League finals. It has experienced players, for many of whom the current season is one of the last opportunities to raise the coveted cup over their heads.

2.     Long bench. Thanks to this, Juventus can play with virtually different lineups in Serie A and the Champions League. Leaders have more time to recover, and practice shows that this has a positive effect on the team’s results.

3.     Motivation. This season, Cristiano will lead the new team to the next Cup, because he wants to write his name in the story. Say, Atletico does not have such goals. Thanks to football streaming, you can make sure of it personally.

The play-off round can bring some surprises, but if everything goes well, then Allegri’s team can easily raise the main club trophy of the Old Continent over their heads.

Bet live site:  www.1xbet.com is an excellent platform where you can make predictions for confrontations featuring Juventus and its rivals. Do not miss this opportunity, join the market leaders today.

Her sophomore album, ”Simisola”, which was released in September 2017, led to her picking up a number of awards including the award for the Album of the Year at the 2018 Headies.

The 16 track album was both a critical and commercial success upon its release, birthing a number of hit singles that includes ‘Joromi’, ‘Aimasiko’, ‘O Wa N’be’ and ‘Smile For Me’, which have become mainstream records.

This was made known according to the platform on its social media page, with the singer also taking to the Instagram stage to appreciate her fans