Borno State Government has recruited 12,735 hunters and vigilantes as members of Civilian Joint Task Force (CJTF) to help fight insecurity in the state.

Alhaji Sugun Mai-Mele, the state Commissioner for Local Government and Emirate Affairs, made this known on Saturday while briefing newsmen on activities and achievements of the ministry within the past one year.

Mai-Mele revealed that N131.9 million would be spent monthly in paying the recruits to enhance security in the 25 local government areas of the state.

“The initiative was geared toward return of peace at the local government level. This measure is aimed at providing complementary services to the security operatives and subsequently building the confidence of the populace.”

“The state has also sought the engagement of mobile police force who will be deployed and stationed at Magumeri, Konduga, Damboa and Nganzai Local Government Areas (LGAs) as their operational centres.”

“All this efforts are geared toward providing adequate security to local communities,” Mai-Mele said.

The commissioner said that the ministry has successfully furnished the palaces of the Shehu of Dikwa and that of Bama, vandalised by insurgents.

Mai-Mele also said that the ministry constructed a befitting office complex for Local Government Pension Board and furnished the council secretariats of Monguno, Biu and Bayo LGAs.

He said, “We also electrified 16 villages in Hawul and Shani LGAs.”

The commissioner stated that the ministry had procured 3,000 metric tonnes of fertiliser and 134 tractors for farmers in the rural areas, as part of measures to boost agriculture.

Mai-Mele said that the governor had approved the release of 80 per cent counterpart fund to the State Primary Education Board for the continual rehabilitation and reconstruction of infrastructure in rural schools.

He said that the ministry was able to carry out immunisation activities in collaboration with the state primary healthcare agency and Ministry of Health.

“We also inaugurated COVID-19 committees at the local government level to curb further spread of the virus,” he said. 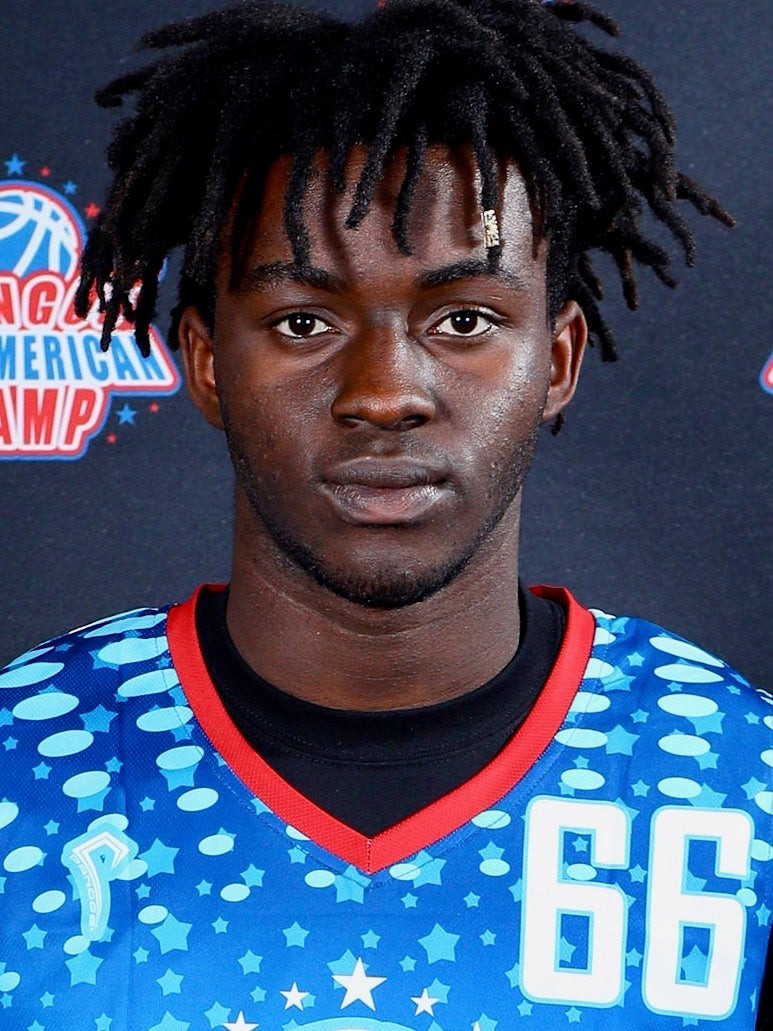 A US-based Nigerian basketball star, Obinna Anyanwu was involved in a serious car crash over the weekend just hours after his team’s championship game in San Diego.

The rising star, who is a top H.S. basketball star was driving home on the 163 from a friend’s house late Saturday night or early Sunday morning when a car forced him to crash into a guard rail, according to the San Diego Union-Tribune.

The report says after Obinna got out of the car after the crash he was hit by another vehicle, causing major injuries. 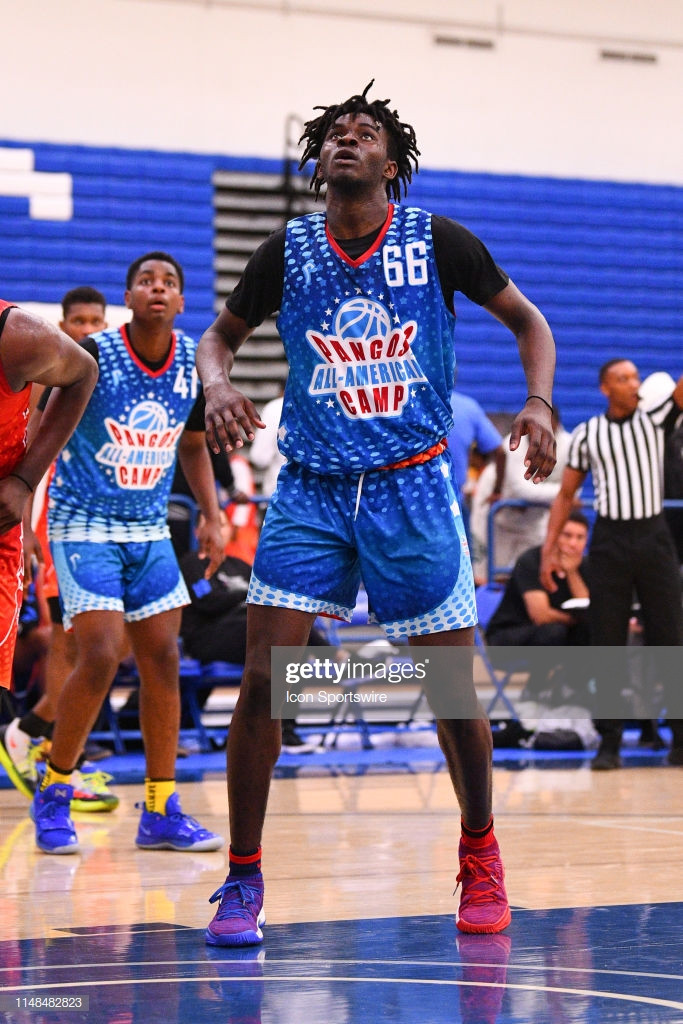 The 6-foot-7 junior was taken to the hospital with a collapsed lung and other injuries, the report added. His condition is unknown at the moment.

The power forward, who has offers from Arizona and USC is considered as one of the top recruits in the 2021 class. Rivals.com has him ranked as the No. 76 junior in the US.

The Nigerian Air Force (NAF) has graduated a total of 2,070 recruits of Basic Military Training Course 40, as part of efforts to boost the operational power of the service.

The Chief of Air Staff, Air Marshal Sadique Abubakar, and some top officers of NAF attended the passing out parade of the recruits which held on Saturday in Kaduna State.

In his remarks, the air force chief explained that the new personnel were recruited to boost the fight against insurgency, banditry, and other related crimes in the country.

He told the new recruits to be prepared to pay the supreme price in defending their fatherland, especially at a time when the country was facing several security challenges.

Abubakar reminded the graduands about the duties of protecting the territorial integrity of the nation, and to also submit to both civil and military authorities at all times.

He announced that his administration would always place a high priority on the welfare and capacity building of officers and men of the service.

The passing out parade marks the end of the six-month training of the new recruits after they were carefully selected for the drill at the Nigerian Air Force Military Training Centre in Kaduna.

It also comes ahead of their deployment to the front line, thereby bridging the manpower gap in the service.

As part of the effort to prepare the young airmen and airwomen for the task ahead and in pursuance of the service’s mission-oriented force development, the curriculum for their course was reviewed with the introduction of internal security module.

At the event, awards were presented to recruits who distinguished themselves in the course of the training.

Amotekun Is A Christian Agenda To Silence Us – Osun Muslims

Her first Fenty fashion line becomes available to purchase online on Wednesday. So it’s no surprise that Rihanna is heavily promoting the collection on her Instagram as the clock ticks down.

The pop star and businesswoman has even recruited her mom Monica to help hype the designs, sharing pics of the two of them together on Monday.

Rihanna wears a tan mini skirt with a matching baggy tan jacket with black lining in the shots.
Her mother sports a pair of square-shaped sunglasses which presumably are also from her daughter’s collection. 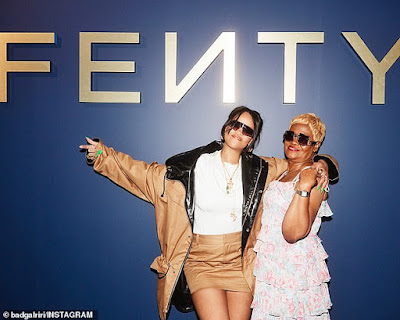 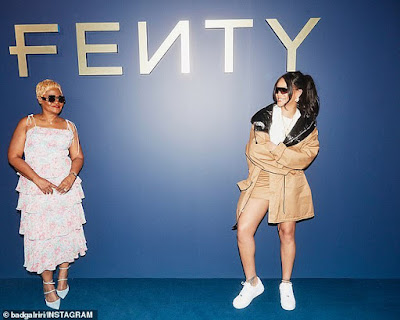 Brands Distance Themselves From Lori Loughlin And Daughter Olivia Jade 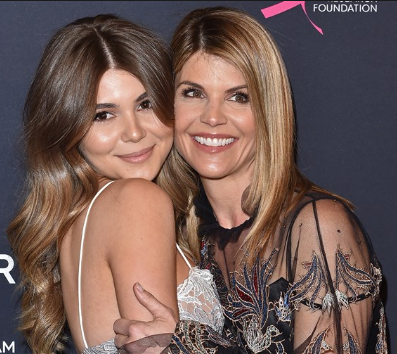 “Fuller House” actress Lori Loughlin and her daughter Olivia Jade Giannulli, 19, have lost endorsements after they were exposed for being involved in a college admissions scam (read here).

So far, three companies have distanced themselves from actress Lori Loughlin and her daughter.

The Hallmark Channel severed ties with Loughlin on Thursday afternoon, saying in a statement to CNN:

We are saddened by the recent news surrounding the college admissions allegations. We are no longer working with Lori Loughlin and have stopped development of all productions that air on the Crown Media Family Network channels involving Lori Loughlin including Garage Sale Mysteries, an independent third party production. 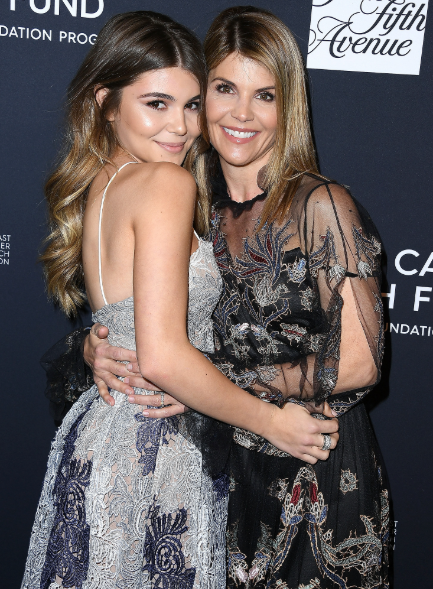 The company said in a statement to CNN:

The company does not currently have a relationship with either of them.

The technology company said that it worked with Loughlin and her daughter in 2017 for a “one time product campaign.”

Also on Thursday, the cosmetic giant Sephora announced the company would be ending a makeup partnership with Loughlin’s daughter.

A statement released by the company said:

After careful review of recent developments, we have made the decision to end the Sephora Collection partnership with Olivia Jade, effective immediately.

Olivia Jade is a social media influencer with more than 1.4 million followers on Instagram and 1.9 million subscribers on YouTube. A number of brands partnered with her due to her influence on social media.

Loughlin, her husband, designer Mossimo Giannulli, and fellow actress Felicity Huffman are among 50 individuals facing federal charges in what investigators dubbed “Operation Varsity Blues” – a scheme in which wealthy parents allegedly cheated to help their children get into prestigious universities (read here).

Her parents are charged with conspiracy to commit mail fraud and honest services mail fraud. They allegedly paid bribes totaling $500,000 in exchange for their two daughters to be designated as recruits to the USC crew team, though they did not participate in crew, according to court filings obtained by CNN.

Total number of employed pastors expected to swell to 22,000 which is three times bigger than the entire global workforce of first bank Nigeria

The Living Faith Church led by Bishop David Oyedepo has revealed that the church has now procured 3,600 new church properties within a space of just two months(January -February 2019) and has conducted thousands of interviews for pastors who would mount the parishes that the new 5,000 auditoriums the church would build across the world would be sited.

It would be recalled that the Bishop in a report by Leke Beecroft of Church Gist declared that the Church would establish 5,000 newer auditoriums.

In a bid to curb traffic gridlocks on Lagos roads, the Lagos State Traffic Management Authority, LASTMA, on Sunday said it has engaged over 1,400 new graduate traffic managers.

Mr. Olakpe said that various orientation and training programmes were undertaken for LASTMA officials on traffic control and management to ensure professionalism in the discharge of their duties.

“The trainings are ongoing to capture the old officials within the state to blend with the newly recruited graduates.

“About 1,400 new officials were recently recruited and trained to bring improvement, discipline and curb gridlocks within the state.

“We have about 4,250 LASTMA officials to ensure free flow of traffic on various routes in Lagos State,” he said.

The LASTMA boss said that the officials were trained on protocol of arrest, surveillance and traffic management.

Mr. Olakpe added that there were various disciplinary departments at the agency to punish any official who is found wanting in the line of duty.

“We have departments and sections that deal with discipline like provost marshal’s office, surveillance and monitoring unit and LASTMA complaint units.

“All these sections are in position to deal with any official who disobey the rules and regulations of the authority,” he said.

NAN reports that eight LASTMA officials were on August 14 sacked for receiving bribes.

The LASTMA chief executive said that the authority had been working assiduously to reduce gridlocks in Apapa and its environs.

He said that the agency had established “Operation Keep Traffic Moving’’ to ease gridlocks in Apapa and other parts of the Lagos metropolis.

“LASTMA has been assisting in the movement of traffic in Apapa by trying to streamline traffic; it has been doing its best to reduce the gridlocks being experienced in the area,” he said.

The Acting Chairman of the Economic and Financial Crimes Commission, EFCC, Ibrahim Magu, has identified courage, discipline, commitment and loyalty as crucial to success in the crusade against corruption.
He made this assertion on Monday, January 30, 2017 while opening the second phase of the Detective Assistant course II program at the EFCC Academy, Karu.
The EFCC boss reminded the new cadets that corruption is the mother of all crimes adding that every evil is rooted in corruption and admonished them to always shun acts capable of compromising their official duties.
“We are passionately involved in fighting corruption, all of you must hate corruption and you should not be found to be involved in corrupt practices. The EFCC as an anti-graft agency has a high reputation in the world. It is an agency where anyone who has integrity and interest of the country at heart can serve.
“If you join the EFCC because you want to make money, you better leave now. We have zero tolerance for internal corruption. We will figure you out, dismiss you and prosecute you’’, he warned.
Magu, who expressed delight over the outstanding performance of the new 331 cadets from the training camp in Kaduna, congratulated them for winning prizes and making the EFCC proud. He urged them to make sure that discipline comes first while discharging their duties.
The anti-graft czar gave reasons for the extra one month training organised for the new operatives saying: “It is to bring you back home because you belong to the EFCC; equip you with skills required to work among civilians and ordinary Nigerians and teach you issues of fundamental human rights. You will also be introduced to the EFCC code of professional ethics and EFCC core values which include integrity, courage, leadership, professionalism, and partnership’’.
In his welcome address, the commandant of the EFCC Academy, David Tukura said that the essence of assembling the newly graduated operatives was to bring them home after their six months rigorous training. He described the operatives as “soldiers against corruption’’, adding that, their one month stay at the academy would avail them the opportunity of knowing the fundamental rights of Nigerians.