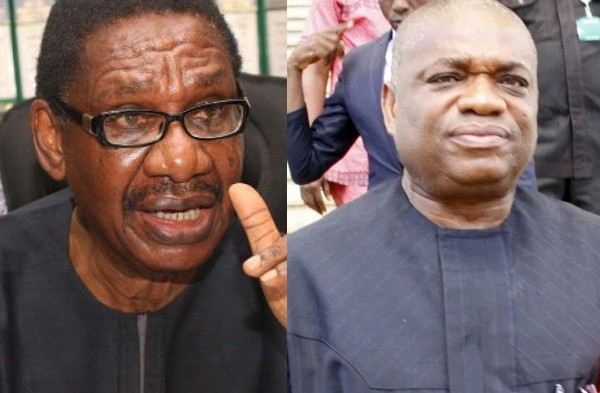 Professor of law, Itse Sagay (SAN) has shared his thoughts on the Supreme Court judgment of May 8 which nullified the trial and conviction of a former Governor of Abia State Orji Kalu, and Ude Jones Udeogu, a former Director of Finance in Abia State Government for N7.1bn fraud.

The apex court in the judgment nullified Section 396(7) of the Administration of Criminal Justice Act, 2015 which had enabled the then President of the Court of Appeal, Justice Zainab Bulkachuwa (retd) to issue fiat to Justice Mohammed Idris, who was elevated to the higher bench in June 2018 to return to the Federal High Court to conclude the case.

A full panel of seven justices of the Supreme Court headed by Justice Olabode Rhodes-Vivour in nullifying Section 396(7) of ACJA, held that it was unconstitutional for a judge to appear to be wearing the caps of two courts of different hierarchies at the same time.

However reacting to the Supreme Court’s judgement in a statement released on Monday May 18, Sagay who is also the Chairman of the Presidential Advisory Committee Against Corruption (PACAC) said the decision “clearly led to injustice”. He averred that justice was not done to the Nigerian society whose patrimony was looted to the detriment of the welfare of the public.

Sagay insisted that the nullified Section 396 (7) of the Administration of Criminal Justice Act (ACJA) 2015 which allowed elevated judges to conclude cases, was a major relief provided by the National Assembly against the stranglehold of public corruption. He added that the ACJA provision is inconsistent with Section 253 of the 1999 Constitution, which provides that “the Federal High Court shall be duly constituted, if it consists of, at least, one judge of that court”.

“There is absolutely no reference in the constitution to the position of a promoted judge going back to the High Court to complete a 90 per cent heard corruption case to enable litigation to come to an end.

“The provision in Section 253 is simply intended to establish that, unlike the Court of Appeal and the Supreme Court, a High Court can be constituted by a single judge. No more no less.

“How can the highest court of the land spring out a technicality to inflict such a terrible wound on our criminal justice system?

“Should the Supreme Court not be using all its knowledge, power and authority to ensure that looters of public funds are brought to justice?

“What message was the court sending out to the Nigerian public and the world by employing a technicality to save those convicted of financial crimes against the nation and people of Nigeria?

“This decision is contrary to the mission of the Supreme Court in Nigeria.  It has clearly led to injustice.

“It flies in the face of what the court stands for and is in direct conflict with the position of the great Justices of this very Supreme Court in an era now nostalgically referred to as the ‘Golden Age’ of the Supreme Court.

“At the high level of the Supreme Court, against whose judgments there can be no appeal, it is mandatory that the Justices must consider the consequences and impact of their judgments, in order to avoid public injury, and sending the wrong message to potential violators of critical social norms.

“It is alright for a lawyer fresh from the Law School or a young, newly appointed judge to indulge in 2 + 2 equals 4 types of judgment.

“As he gains experience and progresses up the ladder of authority, he must add the norms and values of society to his judgments.

“At that level, a judgment must be based on justice, merit, not on technicalities.

“All the legal justifications adduced for this shocking decision hold no water.”

This is coming after Orji Uzor Kalu hired a 12-man team of lawyers including six Senior Advocates of Nigeria (SANs), to secure his release from prison.