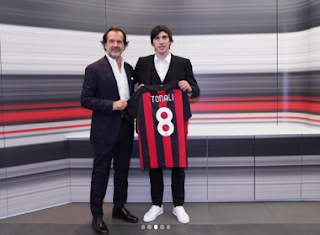 It was officially confirmed on Wednesday that the 20-year-old had signed from Brescia on an initial season-long loan for a fee of £9 million, with the option to buy him permanently for £14 million next summer.

Tonali, who was labeled “one of the most promising young talents in international football” by CEO Ivan Gazidis this week, is often compared to club legend Andrea Pirlo.

In fact, Andrea Pirlo believes Sandro Tonali is “the most promising” midfielder in Italy but doesn’t feel the 20-year old is the heir to his throne.

Milan, meanwhile, have decided to hand the number eight jersey to the youngster – a number previously worn by another cult hero, Gennaro Gattuso, but Tonali wanted to make sure the Italian was happy with that decision.

He reportedly phoned Gattuso to ask if he was fine with him choosing a number that the no-nonsense Italian midfielder wore for 13 seasons at the San Siro.

The Napoli boss granted his classy request and now, Tonali will try and do the number justice as he lives out his ultimate dream.

In the past, the young midfielder has denied the comparisons to Pirlo, who was also a product of Brescia’s academy.

“It’s difficult to answer this, on the pitch I’m a little more like Gattuso,” Tonali explained after making his italy debut against Liechtenstein last year.

“Ideally, I want to be a mixture of all three [De Rossi, Gattuso and Pirlo].

“For the fight I put in on the pitch, that’s more like Gattuso.”

Tonali has since opened up about his ‘dream’ move to Milan.

“These are strong, wonderful feelings. I am so happy,” he told Sky Sport Italia. “Playing with the Milan shirt was a dream of mine, I haven’t worn it yet, but that will happen tomorrow [Thursday].”

“I will sleep tonight and tomorrow will have a great training session,” added the three-time Italy international.

“We are excited to welcome Sandro to the Rossoneri family. As a talented, young midfielder he will not only embrace the values of AC Milan but also make a significant contribution to the future success of the club.”