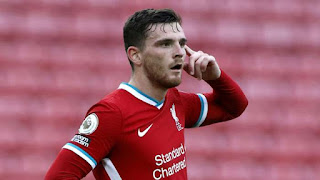 Liverpool star Andy Robertson has aired his delight at seeing former Chelsea defender Filipe Luis bill him as “the best left-back in the world”.

The Scotland international lined up against the experienced Brazilian in the 2019 Club World Cup final.

Jurgen Klopp’s side faced Flamengo in that showpiece event, with Roberto Firmino netting the only goal of the game to down his fellow countrymen.