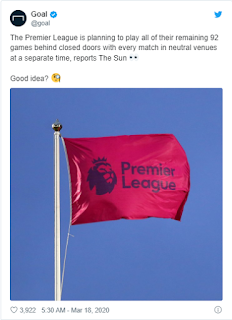 The Premier League will play all 92 remaining games behind closed doors at neutral grounds, according to reports, with all games being broadcast on live television.

It is believed the plan will be unveiled at a Premier League meeting on Thursday as clubs try and save their season amid the coronavirus dilemma.

The Sun claim that every game will be played at a separate venue, with two or three grounds hosting the games, ‘most likely’ in the Midlands.

The report goes on to state that grounds could even stage ‘more than one game a day’ with teams playing ‘every three days’ as Premier League clubs try and complete their set of fixtures.

The belief is that a neutral ground will stop fans from turning up outside a stadium, like Paris Saint-Gemain supporters did during their Champions League tie against Borussia Dortmund last week.

It would also keep down the number of police and medical staff needed.

With nine games remaining of the current season, the Premier League has been put on hold until at least April 4th due to the current COVID-19 outbreak.

There has been an air of uncertainly about whether or not fixtures will be completed and Alan Shearer believes Liverpool should not be given the title if the season is incomplete.

“As harsh and as horrible as that would be for some clubs, none more so than Liverpool, it is the only outcome.” he told The Sun.

“If you cannot complete the fixtures then you cannot go handing out titles or consider relegating anybody.

“But I cannot see how it would be fair to hand them the title, despite the fact it is obvious nobody is going to catch them. They only need six points to wrap it up but they haven’t got them yet so for that reason it has to be declared null and void.

“It would be very different if the season was suspended after they had got the points to win it. But they haven’t and however horrible a scenario it would be, it’s the only option.”

2023: Tinubu Ramps Up Support In S’west Ahead Of Declaration

#EndSARS Activists: Government Yet To Unfreeze Our Bank Accounts Since Oct 2020