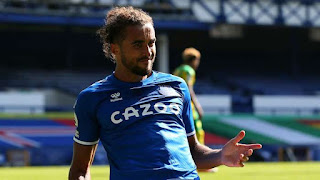 The Premier League season is just four games old and already Dominic Calvert-Lewin is staking a claim for the Golden Boot.

It has been a remarkable start to the season for the Everton forward, who has scored six league goals, including a hat-trick against Tottenham. He also netted a treble in the Carabao Cup against West Ham and struck on his England debut against Wales.