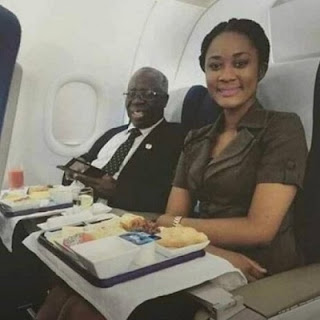 Apparently, online is lit with another controversy after a photo of Senior Minister Yaw Osafo Marfo and his alleged girlfriend has surfaced.

In a photo that is making rounds on the internet, the 78-year-old Minister is seen with a pretty much young lady in first-class flight.

Even though there is currently no explanation for the photo circulating online, social media users believe the Minister is certainly going on holidays with his sidechick!

Many are also wishing doom for him; that his sex tape or romantic chat is released soon just like Kan-Dapaah.

Coach Slaps Female Boxer, Removes Her Wig To Motivate Her During Fight