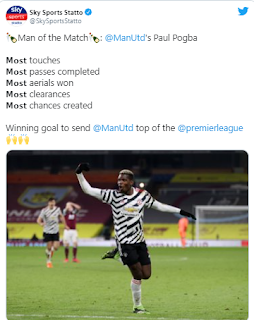 Paul Pogba gave one of his best performances in a Manchester United shirt on Tuesday night as his side went three points clear in the Premier League title race.

The French midfielder has struggled to really impose himself on the club’s season in recent months, with Ole Gunnar Solskjaer opting for the likes of Fred and Scott McTominay in midfield, but last night’s performance against Burnley was nothing short of outstanding.

Pogba often found himself further forward against Sean Dyche’s side and as a result, he was able to showcase his ability to make a difference in the final third, spraying passes to wide areas while drilling through balls to Anthony Martial.

As you can see below, it was a sublime performance from the 27-year-old midfielder, who topped off a great outing with a 71st-minute winner.

After United secured a 1-0 win against The Clarets, Pogba praised he teammates for their efforts but refused to get carried away.

“I’m always happy when I win, so obviously today we won so I’m very happy,” Pogba told Sky Sports in his post-match interview.

“Happy that we played well and happy that we’re at the top. But as I say, still a long way to go, we have big games coming up so we have to focus on that too.

“You could see the game was going both ways. They have a style of play [that] we know, they’re very strong and we knew it would be difficult. We had to just focus on ourselves and we knew the goal would come. Good focus from everyone and we have to keep doing this.

“The game today was very hard, very difficult, and obviously we wanted to win but it’s not easy to play here. But we got the three points and we’re happy for that, but still a long way. Now we’re going to have to focus again until the end of the season.”

Sky commentator and pundit Gary Neville picked Pogba as his Man of the Match against the Premier League strugglers and it’s hard to disagree.

“He’s been good tonight, a big influence in this second half,” Neville said on Sky Sports. “Definitely Paul Pogba [is my man of the match], it hasn’t just been the goal in the second half.

“I just think his passing in the second half, even his defensive work has been really disciplined. He’s been good in his own box, he’s been good getting back in front of Barnes and Wood, challenging for those headers to let Maguire and Bailly drop off.

“He’s done a lot of things very well. He was the best player on the pitch for 20 minutes after half time.”

Paul Pogba on how happy he is with his current form for Manchester United @paulpogba pic.twitter.com/df3Q3s1CBB