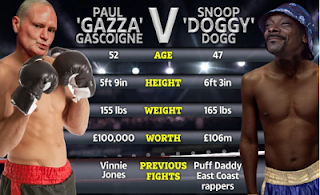 The England, Tottenham and Newcastle legend was angered after the rapper mocked him in an Instagram post showing the negative effects of “alcohol abuse”.

Snoop, 47, compared Gazza’s appearance to his own that attempted to show how “marijuana abuse” was less damaging than alcohol.

Gascoigne, 52, has infamously struggled with alcohol and mental health issues in the past.

He would hilariously hit back at the American by posting a photo of a mutt with a golden necklace and hair styled like the hip hop star.

Gascoigne would then add further fuel to the fire with a Twitter video of him pretending to smoke, while saying: “Snoop, Snoopy Dogg, woof, I’m coming for ya”.

And now he wants to settle matters once and for all by telling him to “bring it on” after calling him out for a few rounds in the ring.

Speaking to Good Morning Britain, he said: “I was in Spain, doing a couple of charity events and I said to Shane on the way back on the plane ‘I might get some decent press’.

“But when I landed my Twitter page went mad. I thought ‘what’s happening?’

“When I found it was Snoop Dogg I thought ‘why me’? That happened six years ago’.”

Joking about Piers’ reputation in the States, he added: “You’re famous in America and now so am I.”

He added: “To come from Snoop Dogg, I’m a fan of his as well. I can’t believe it.

“I’ll do a charity boxing match with him – cannabis vs booze, bring it on. I’ll take him in the ring – I’ve been working hard, working out as usual. 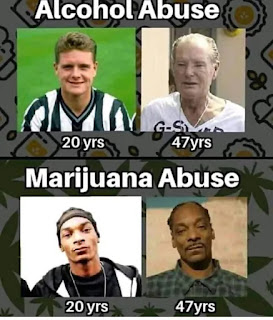 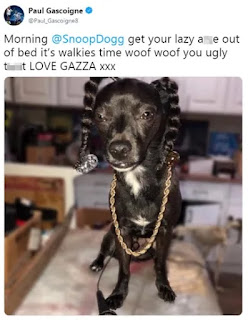 I Stopped Eating Cow Meat, Herdsmen Have Sex With Cows For Ritual - FFK

David Beckham is set to return to Major League Soccer

Ronaldo Red Card To Be Reviewed By UEFA Next Week

Simi has shared her opinion on the effect of the Coronavirus pandemic in the entertainment industry. According to the singer,…

In a press statement released on Thursday, April 9, Lagos Ministry of Health, the Government has commenced house-to-house case identification…

How Naira Marley And Burna Boy Are Destroying Their Music Careers