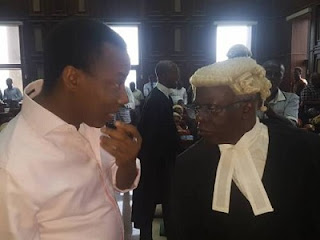 According to SaharaReporters, the Nigerian Senate has invited lead counsel to Omoyele Sowore, Femi Falana (SAN), to appear before it over the invasion of the Federal High Court by operatives of the Department of State Services.

Falana was asked to appear before the Committee on Judiciary, Human Rights and Legal matters on Thursday by 10:00am.

The Senate had mandated the committee to investigate the invasion of the court after some DSS officials stormed the place to effect the rearrest of Sowore, who is standing trial in  case brought against him by the Nigerian Government.

The Senate, in the letter to Falana, noted that the court should not be disrespected, adding that lawmakers and Nigerians would like to know what actually transpired in the court.

The letter reads, “Pursuant to Rule 43 of the Senate Standing Orders, 2015, as amended, Senator Michael O. Bamidele (Ekiti Central Senatorial District), drew the attention of the Senate to the alleged court invasion by officers of the Department of State Services on Friday, December 6, 2019.

“He stated that the courtroom is a temple of justice, which should be devoid of such practices.

“As such, Nigerians deserve to know what transpired in the court and he urged the Senate to investigate the matter.

“Consequently, the Senate deliberated on the matter and after extensive deliberations, it was referred to the Committee on judiciary, Human Rights and Legal Matters to among other things conduct investigation on the alleged invasion of the court and report back to the Senate.”

“I Once Had Miscarriage, It Was A Bloody Experience” – Betty Irabor