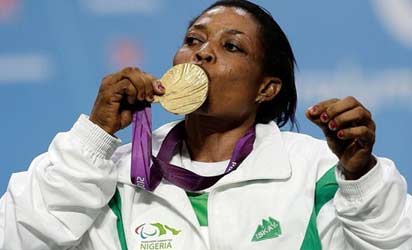 Gold medallist Esther Oyema of Nigeria kisses her medal during the Victory Ceremony for the women’s -48 kg Powerlifting at ExCeL.

The News Agency of Nigeria (NAN) reports that Nigeria grabbed all the 20 gold medal on offer to assert its world dominance in the sport. The country also won 15 silver and 7 bronze medals, making it a total of 42 medals in all as the competition ended.

Are said that he did not expect anything less from the athletes, while commending them for doing the country proud. “I am happy with what my athletes have been able to achieve on home soil, they all performed excellently well.

“I remember that sometimes last year, i vowed that we are going to host and win this competition and I thank God that it has come to reality, ” he said. The coach said that effort would be made by the federation to develop the rising talents who took part in the championship.

“I must say that the future of powerlifting in Nigeria is bright, the upcoming athletes really proved their worth in the championships and we will continue to nurture them to stardom.

“We have world class equipment to train them and we will expose them to more international competitions, ” he said.

NAN reports that the championships which began on Jan. 28 is an International Paralympic Committee event.