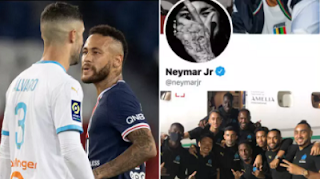 Neymar has hit back at Alvaro Gonzalez’s claims that Paris Saint-Germain must ‘learn to lose’ – by doubling down on his racism accusation.

The Brazilian was one of five men sent off as PSG fell to a 1-0 defeat against Marseille in ‘Le Classique’ on Sunday evening.

Neymar hit Gonzalez in the back of the head and later claimed it was due to the Spaniard making a racist remark on the pitch.

Following the game, Gonzalez insisted he hadn’t been racist and added PSG players couldn’t take their loss on the field.

However, Neymar was quick to respond and said Gonzalez ‘has no character’ in a fiery rant.

“You are not a man to assume your mistake, losing is part of the sport,” the 28-year-old begun.

“Now insulting and bringing racism into our lives no, I don’t agree. I DON’T RESPECT YOU! YOU HAVE NO CHARACTER! Assume what you say mermon … be a MAN RAPÁ! RACIST”

Gonzalez’s original tweet stated: “There is no place for racism. Clean race and with many colleagues and friends on a daily basis. Sometimes you have to learn to lose and take it on the field. Incredible 3 points today. Allez l’OM. Thanks family

After hitting Gonzalez in the back of the head, Neymar regretted not ‘being in the face of this asshole,’ with many thinking he was referring to his opponent.

The four other players sent off at the Parc des Princes were Leandro Paredes, Layvin Kurzawa, Jordan Amavi and Dario Benedetto.

Another incident in the game saw Angel Di Maria allegedly spit at Gonzalez in the first half.

Marseille, meanwhile, are fifth and have won both of their games so far.

We expect to hear much more fallout from tonight’s Le Classique. pic.twitter.com/U6ELYKNaXp