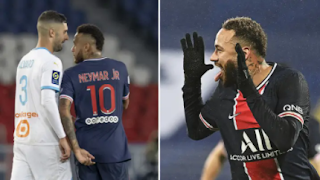 Neymar and Alvaro Gonzalez took their rivalry to social media on Wednesday night, after PSG beat Marseille in the Trophee des Champions.

Back in September the two Ligue 1 sides were involved in an explosive match as Marseille defeated the French champions in the league.

The game ended with five sendings off after a clash of all the players, with Neymar seeing red for striking Gonzalez on the back of the head.

The fallout from the match saw both players accuse the other of racism but in the end neither faced punishment due to a lack of evidence.

On Wednesday the pair met again in the French Supercup, the Trophee des Champions, pitting last season’s champions with the runners up, after the Parisians also won the Coupe de France.

Neymar bagged the winner, an 85th minute penalty, before Dimitri Payet scored a late consolation, but the fireworks didn’t take place till after the match.

The Brazilian took to Twitter to goad the Marseille defender over the win for PSG.

The Spanish defender hit back with a picture of him man handling his rival during the game with the caption, “My parents always taught me to take out the trash. Go OM always.”

That wasn’t the end of it of course. The former Barcelona forward replied laughing at his rival saying, “And he forgot how to win titles.”

Gonzalez then went really childish with his next retort, tweeting a picture of Pele holding three World Cup trophies with the caption, “Eternally in the shadow of the king.”

Considering Pele is one of the best players ever it’s hardly the insult the former Espanyol centre back thinks it is, and it wasn’t the end of it.

The world’s most expensive player had the last word saying “And you’re in my shadow. Made you famous…you’re welcome.”

Nigerian Poet, Godspower Oshodin & Music Producer, Vstix Make History In Africa To Produce ‘A Poet Who Died by His Poem’