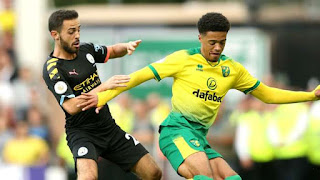 Lewis, 22, came to the fore with a fine season at Norwich under difficult circumstances, proving one of the few high points in a 2019-20 campaign that ended with the Canaries bottom of the table and relegated.

That form placed him in the sights of several Premier League clubs this summer, with Liverpool among others linked with an approach to make Lewis Andrew Robertson’s deputy at left-back before the club signed Kostas Tsimikas.