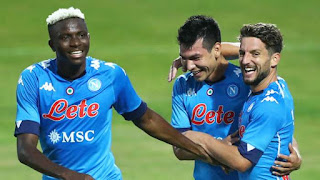 After a scintillating debut season for Lille, where he scored 13 goals in 27 Ligue games, the Super Eagles striker is ready to have another experience against “one of the greatest players on earth”.

Osimhen’s Napoli visit Gervinho’s Parma for their opening league outing on Sunday but the 21-year-old also has his sights set on the trip to Allianz Stadium on October 4.