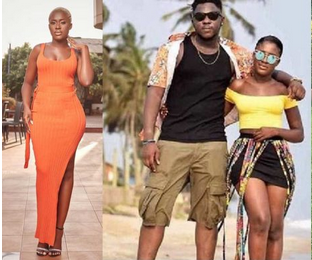 Looks like Yolo actress Fella Makafui might be going back to his raper boyfriend AMG Medikal judging from a reply she gave to a social media user.

For some days now, Ghanaians have been talking about Medikal and Fella Makafui relationship after it was revealed that the two were having challenges in the relationship which later they both confirmed they are single.

Their break up rumors heightened last Sunday when Fella Makafui drove Medikal and Criss Waddle away from her wine shop after they had gone there to apologize and patch things up.

Fella Makafui updated her social media yesterday that she was bored and was ready to answer questions from her fans.

During the Q and A session, a fan wanted to find out her current relationship with the rapper and if whether she was ready to enter into another relationship anytime soon.

But Fella in her reply failed to address her current relationship with the rapper but she, however, made it clear that the rapper is irreplaceable. 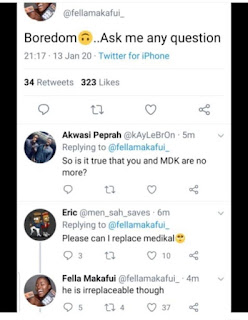 Fact that I am a private person and not full of controversy, makes people hate me – Tanasha Donna cries out

Loved Up Pictures Of Actor Blossom Chukwujekwu And Wife

Toke Makinwa Expects Her First Baby Without A husband

How 9 Nigerian Girls Being Trafficked To Lebanon, Dubai and India Were Rescued At Lagos Airport

According to a NAN report, the Operatives of Nigeria Immigration Service (NIS), Murtala Mohammed International Airport (MMIA), Command in Lagos,…

Murder of Chief Odunukwe: How Killer Squad was Smashed

Bauchi State has recorded three new cases in the recent outbreak of Lassa fever across the country. The Executive Chairman…