Skip to content
The 21-year-old is determined to seal the European title with the club but says they need to sign the right players to make it happen
Kylian Mbappe says Paris Saint-Germain must make smart decisions in the transfer market if they are to achieve their dream of winning the Champions League.
After sealing a treble of trophies in France, Thomas Tuchel’s men reached the Champions League final for the first time last season, but were bested by Bundesliga champions Bayern Munich, with PSG youth academy product Kingsley Coman netting the decisive goal.
The Ligue 1 champions have seen the likes of Edinson Cavani, Thiago Silva, Eric Choupo-Moting and Thomas Meunier leave this summer, while their only signings have been striker Mauro Icardi and goalkeeper Sergio Rico, who joined on permanent deals after spending last season at the club on loan. 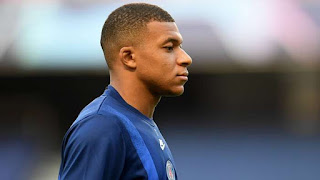 Official Dj Splash Celebrates His Fiancee On Her Birthday