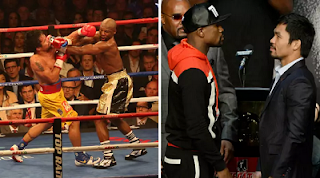 Floyd Mayweather wants to build a casino empire in Japan and it could be launched with a huge fight against Manny Pacquiao.

SunSport have revealed in an exclusive report that Mayweather is keen to launch his casino empire with a huge fight.

One of the candidates is Pacquiao who Mayweather defeated back in 2015.

But the 42-year-old is also keen on exhibition fights against non-boxing opponents as he has in the past against Conor McGregor and Japanese martial artist Tenshin Nasukawa.

Mayweather launched The Money Team (TMT) Japan in Tokyo this June, as well as a partnership with management company Libera and Kyoei boxing gym.

“Mayweather came to Tokyo to set up TMT Japan because of the Japan casinos that open in the next year.

“There are casinos opening in Cambodia, Singapore and China as well. It means boxing will get more and more popular.

“The Manny rematch is the biggest thing that can happen.

“I hope it does happen, it could be a big possibility that fight is the grand opening for the Japan casinos.”

It was also revealed Mayweather put the brakes on a potential exhibition bout this year to focus on negotiating a rematch against Pacquiao.

Lau added: “Mayweather came two times to Hong Kong, he spoke with my son Jayson and we had communications but now he is focusing on the Pacquiao rematch.

“We were talking about an exhibition in China, a big event but not a recorded professional boxing fight. Something like Mayweather vs Tenshin in Japan.

“We spoke a bit about doing a special fight in China, but half way through he turned to the Pacquiao rematch so we stopped.”

The duo have participated in numerous back and forth’s since their ‘Fight Of The Century’ in May 2015.

Most recently, ‘Pac Man’ called out Mayweather with a bizarre Twitter video.

The video below features him holding pads for 55-year-old Jack Ma.

He then addresses the camera where he challenges Mayweather to a ‘real fight’ and puts forward his billionaire friend if the retired American is looking for an opponent for an exhibition bout.

“Yeah I am ready. Any place, any time. Manny’s team is ready,” Ma says in the video.

The duo having a rematch would send shock waves through the boxing world even if it was just an exhibition.

Davido Screams "Wizzy Where Are You?" At Dubai Party.

Carlo Ancelotti Has Left His Role As Bayern Munich Manager

Afcon 2019: Elimination will be painful due to our quality – DR Congo captain Mulumbu