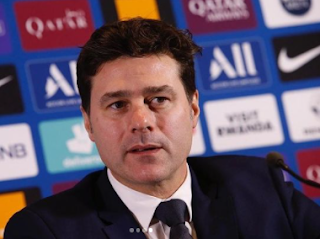 City’s record all-time goalscorer, Sergio Aguero, is entering the last six months of his contract. That means he is free to sign a pre-contract agreement with a European club now, ahead of a free transfer in the summer.

Extension talks are apparently ongoing between the 32-year-old and his club. But nothing is settled and, according to football agent Bruno Satin (as reported in The Sun), Pochettino is desperate to take his fellow Argentine to PSG.

A strikeforce containing Neymar, Kyllian Mbappe and Aguero would certainly be among the most terrifying in Europe.

The Ligue 1 champions already have an Argentine goalscorer in Mauro Icardi, but he’s had problems with injuries this season and wasn’t a first choice under Pochettino’s predecessor Thomas Tuchel.

Plus with Edinson Cavani now gone, PSG are one of the few clubs in Europe who can afford Aguero’s reported £200,00+ a week wages.

How Pep Guardiola might feel about losing his No 10 is also a factor. Aguero has struggled to get going this season due to niggling injuries, taking part in only five Premier League games.

Plus out-and-out strikers aren’t always part of Guardiola’s game plan – as he showed in picking an all-midfield attack in City’s 3-1 destruction of Chelsea at the start of January.

That could leave the door open for Pochettino and PSG to pounce and end Aguero’s legendary spell with the Citizens.

Dele Alli is another player reported to be on Pochettino’s wish list. Which makes sense as the Tottenham midfielder played his best football under Poch and has struggled to find his peak form in recent seasons.

A change of scene and perhaps manager might help the England international. But if Pochettino does make a move for Aguero and Dele this year, PSG could have a distinctly “Premier Ligue” look by the time the 2021/22 season begins.

Do you think Sergio Aguero should leave City in 2020 or does ‘Kun’ still have more to give in England? Let us know in the comments.