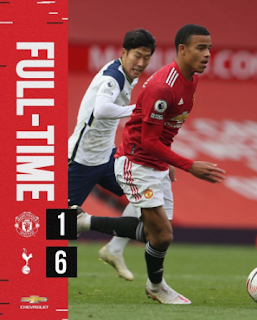 It would be possible to dismiss a 6-1 capitulation as a one-off brought on by the harsh dismissal of Anthony Martial in the first half. Possible but unwise.

If this was an aberration then how do you explain the comprehensive 3-1 defeat at home to Crystal Palace a fortnight ago? Or the incredibly fortunate 3-2 win at Brighton last week that should have ended in a comfortable win for the home side?

United could easily be on zero points now with a goal difference well into minus double figures after three games.

Throughout this horror show, the television cameras focused morbidly on Ed Woodward sat on his own in the stands. The United chief swigged nervously on a bottle of water, no doubt hoping there was something a little stronger inside and that his mask was big enough to cover the rest of his face.

Where now for Woodward? If he thought the rather puzzling move for Edinson Cavani over the weekend would appease fans fretting over United’s lack of progress with one day now left of the transfer window, any vague sense of optimism was ruthlessly snuffed out by Spurs — and Jose Mourinho of all people.

Oh, how he must have loved this. Not only beating his old club but stuffing six goals past them playing some quite wonderful football.

As brilliant as Spurs were, United were awful.

When Solskjaer sent on Scott McTominay and Fred for Bruno Fernandes and Nemanja Matic at half-time here, it felt as though the white flag was already going up at 4-1. Spurs scored another two and it could have been worse.

Solskjaer admitted that the 4-0 defeat at Everton in April 2019 was his lowest point as United manager, but this was worse.