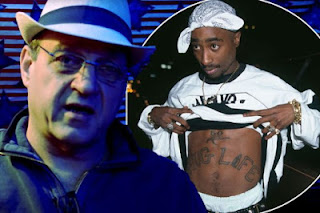 A man who claimed he helped Tupac fake his death has come back from the grave to reveal he faked his own – and says that proves the rapper is still alive too.

In December last year, it was reported that Michael Nice had died just days before he was due to release evidence that proved Tupac is still alive.

Michael, who was Tupac’s former bodyguard, made headlines when he claimed Tupac had been smuggled into Cuba with the help of former President Fidel Castro after the drive by shooting that police said claimed his life.

Now, Michael has revealed that he faked his own death.

In a video posted to YouTube, he says that he did what he did to evade his enemies.

Speaking from an unknown location, he continues: “I know it’s a shock to all the people who know me but I’m back, I’m back to explain everything. I confess I faked my death and I feel quit ashamed about it but it had to be done and I’m here now to explain the reasons why.”

Michael says the fact that he faked his own death proves that he also helped Tupac fake his death because he’s got the “experience” required to pull it off.

He says: “I’ve done it again with myself. It proves that I’ve got those capabilities.”

Michael also says he had been receiving threats and that if he hadn’t faked his death when he did he would have been dead by now anyway.

Michael says he arranged for an ambulance to collect him after he faked his death and that he’d used a magic trick he learned as a youngster to stop his pulse so that when a paramedic checked him they believed he was dead.

He says his “body” was taken to the hospital and that his contacts in the funeral home business arranged to pick him up and switch him out for an actual dead body which was taken to the morgue.

He says he then made his escape and that he couldn’t believe how smoothly it all went.

Michael goes on: “I laid low for a year and I’m back now to tell my story, put things straight and get on with the mission.

“There’s only one thing I can guarantee out of all of this, it doesn’t matter whether you believe it or not, retribution is coming.”