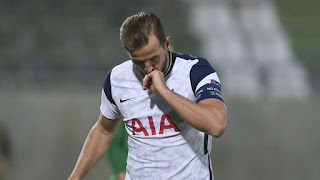 Harry Kane scored one and set up another in his 45 minutes on the pitch against Ludogorets, reaching 200 Tottenham goals in the process.

Harry Kane scored his 200th Tottenham goal in a comfortable 3-1 Europa League victory over Ludogorets at the Huvepharma Arena on Thursday.

Captaining the team on his 300th appearance in all competitions, Kane became the third Spurs player to score a double century of goals when he headed in Lucas Moura’s corner in the 13th minute.

The England international and Lucas then reversed roles for the latter to double the scoring after the half-hour mark, with Jose Mourinho’s decision to make seven changes from the side that lost 1-0 to Royal Antwerp in their previous Group J outing paying dividends.