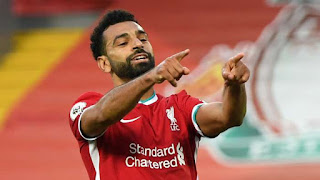 Mohamed Salah has stated that playing without fans was tough but was nonetheless pleased as he scored a hat-trick in Liverpool’s 4-3 triumph over newly-promoted Premier League side Leeds United on Saturday.

The Egypt international got things off for the Reds in the fourth minute via a penalty, but the Whites responded through Jack Harrison eight minutes later.

Liverpool had a 2-1 lead thanks to Virgil van Dijk, but Leeds would equalise again. Even when Salah scored his second of the evening, Marcelo Bielsa’s men made it 3-3 thanks to Mateusz Klich in the second half.