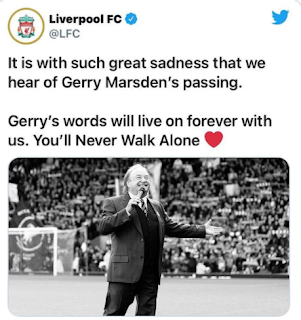 Gerry and the Pacemakers singer Gerry Marsden, whose version of You’ll Never Walk Alone became a football terrace anthem for his hometown club of Liverpool, has died at the age of 78.

His family said he died on Sunday after a short illness not linked to Covid-19.

Marsden’s band was one of the biggest success stories of the Merseybeat era, and in 1963 became the first to have their first three songs top the chart.

The band’s other best known hit, Ferry Cross The Mersey, came in 1964.

It was written by Marsden himself as a tribute to his city, and reached number eight.

Marsden was made an MBE in 2003 for services to charity after supporting victims of the Hillsborough disaster.

At the time, he said he was “over the moon” to have received the honour, following his support for numerous charities across Merseyside and beyond.

Marsden’s daughter, Yvette Marbeck, said he went into hospital on Boxing Day after tests showed he had a serious blood infection that had travelled to his heart.

Ms Marbeck told the PA news agency: “It was a very short illness and too quick to comprehend really.”

He died in hospital, Ms Marbeck said, adding: “He was our dad, our hero, warm, funny and what you see is what you got.”

Liverpool FC posted on social media that Marsden’s words would “live on forever with us”.