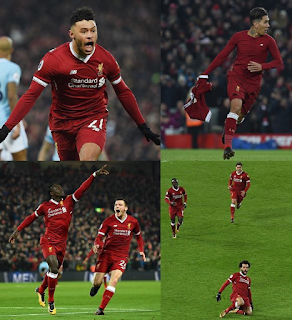 Liverpool’s incredible season has got fans dreaming beyond ending their 30-year wait for a league title.

With 21 wins from 22 games so far, they are chasing a Premier League record points total and a shot at an unbeaten season.

It has already been 39 games since Jurgen Klopp’s side were last beaten in the league by last season’s champions Manchester City in January 2019.

And it’s a trip to the Etihad Stadium, the scene of that last defeat just over a year ago, that would see Liverpool equal Arsenal’s incredible 49-game unbeaten run between 2003 and 2004.

Leroy Sane’s strike decided that game in 12 months ago, and ultimately the destination of the league title with City pipping Liverpool by just a point.

By quirk of fate, if Liverpool and City maintain their current pattern of results, it’s the game where the Reds could seal the title, as they need only 30 more points.

Ten wins from the next 10 would do it.

But they face some tricky assignments ahead of the trip to Manchester in early April.

Wolves lie in wait at Molineux on Thursday, while no one would relish bursting Liverpool’s bubble more than Everton.

Liverpool go to Goodison Park in mid-March, where they have not been on the losing side in nearly a decade.

Crystal Palace at home could be awkward – they are after the last visiting team to win at Anfield in the league in April 2017 – while Southampton, Watford and West Ham won’t be so straightforward.

While matching Arsenal’s Invincibles is a target in itself, they will have to keep going for a further six games to go a whole season unbeaten – as Arsene Wenger managed in 2003-04.

Those final half a dozen games include a final home game against Chelsea, and going to Arsenal in early May – where the Emirates Stadium will be desperate to stop Liverpool sharing their glory.

Arsenal’s own unbeaten run ended in infamy some 15 years ago, when Manchester United claimed a 2-0 win in a tempestuous game at Old Trafford.

Ruud van Nistelrooy and Wayne Rooney both scored, the first goal from a contentious penalty won by Rooney.

In the years since it has become known as the Battle of the Buffet after Cesc Fabregas threw pizza at Sir Alex Ferguson in the tunnel after the final whistle.