Frank Lampard is hopeful N’Golo Kante will be fit for Chelsea’s Premier League clash with Burnley next weekend.

The France international picked up a hamstring injury during the Blues’ 3-1 loss to Manchester City on January 3.

He sat out the win over Morecambe in the FA Cup, victory at Fulham in the Premier League and loss to Leicester City. 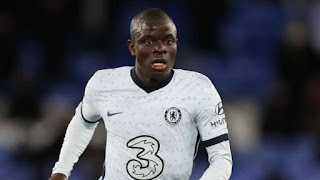