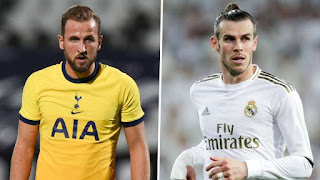 Harry Kane could push for a move away from Tottenham in 2021 if the club fails to match his ambition, admits Teddy Sheringham, but the arrival of Gareth Bale is expected to prevent his head from turning for now.

Big-money moves to various leading sides across Europe have been mooted for the England captain.

Having proved himself to be one of the most prolific frontmen on the planet, interest in Kane is to be expected, especially as Spurs have failed to deliver him much-coveted silverware.