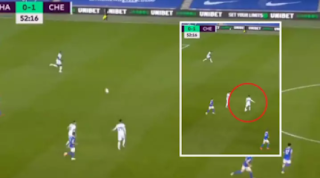 Havertz made his competitive debut for Chelsea in the 3-1 win over Brighton at the AMEX on Monday.

But the £75 million man failed to make a huge impression on his first appearance for his new club.

In fact, the 21-year-old was ridiculed by ruthless supporters who slammed his attempted pass in the second half.

With the score 1-0 to Chelsea, Havertz got himself on the ball and tried to switch play.

Though he completely fluffed his effort, kicking the ball out of play for a throw-in.

Needless to say, fans pulled no punches as they trolled the attacking star.

One Twitter user sarcastically wrote: “Pass of the season by Kai Havertz.”

A second tweeted: “Man thought he was Paul Pogba.”

A third added: “James Rodriguez better than that guy. I swear.”

Havertz, though, impressed Chelsea fans when he showed great recovery to track back and win the ball after losing possession.

His debut lasted 80 minutes as Frank Lampard subbed him off for Callum Hudson-Odoi.

On Havertz, Lampard said: “I liked him. It’s not a game where you come away and say ‘there are 10 vintage moments’ but I thought there were moments of big quality and calmness.

“It’s a big ask [to settle in immediately] there’s a lot on his shoulders for the singing that he was he’s young and coming into a new league.

“He plays the game at such quality and the way in which he receives the ball. We saw a few glimpses of that. We saw him sprint back 80 yards to make a tackle after giving the ball away. Everything I’ve seen in terms of his character is spot on.

“His quality will come through. It’s asking a lot for him tonight but we saw glimpses. We’re going to see a lot more of him, I think he’s a hugely talented young player.”

Chelsea resumes their Premier League campaign at home to champions Liverpool on Sunday.