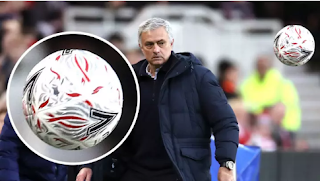 Tottenham manager Jose Mourinho has claimed the £115 Mitre Ball used in their FA Cup tie against Middlesbrough was “too light” before comparing it to a “beach ball”.

The Premier League side could only record scrape a 1-1 draw at the Riverside after Lucas Moura canceled out a second-half strike from Ashley Fletcher.

And after a difficult day at the office, Mourinho decided to take aim at the weight of the ball used in Sunday’s third-round cup tie but insisted it wasn’t an excuse.

“I think this ball is a beach ball,” he told BT Sport. “It’s too light. I don’t think it helps the players. But that’s not an excuse.”

That’s wasn’t the only complaint made by Mourinho after the full-time whistle. He claimed VAR would have ruled out Middlesbrough’s opener in the 50th minute for offside.

“Yeah because the Middlesbrough goal is offside. VAR would give (the offside decision),” Mourinho said.

“The referee was not some guy in an office 200 miles away (today).”

Mourinho was asked in his post-match press conference if he was worried when Fletcher opened the scoring.

“I have to say yes. But you don’t have time to cry, you have to react.” he said.

“We changed things, took our risks. If you look at our team in the last 30 minutes we didn’t even have a midfield player because [Christian] Eriksen and Dele Alli are not midfield players. After that, Lucas, [Erik] Lamela, Giovani [Lo Celso], Son – six attacking players, without a striker.”

Spurs will host the Championship side in a FA Cup third round replay on January 14th.