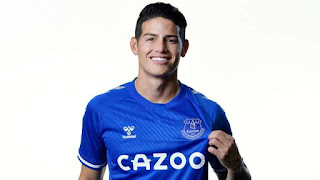 After arriving at Goodison Park, the Colombian international wants other major players to follow as the Toffees target a strong Premier League season

James Rodriguez hopes other “big names” will join him at Everton as they target a strong 2020-21 season.

James joined the Premier League club from Real Madrid for £22 million (€24m/$29m) earlier this month in a huge coup for Everton.

The playmaker is reunited with Carlo Ancelotti, who coached him at Madrid and Bayern Munich, as Everton look to improve on last season’s 12th-place finish.