Ghanaian actress Jackie Appiah has hit back at two other Ghanaian celebs who are fighting over her like a piece of meat.

Two jokers with little chance of landing Jackie, comic actor Funny Face and boutique owner Richard Brown aka Osebo, have been fighting over her.

Funny Face in particular has tried a couple of times to express his love for Jackie but she’s ignored him either time.

Osebo has also now turned his eyes on her, revealing that he’s ready to marry her and make her his queen.

After his declaration of love, Funny Face hit back and said Osebo should not even try stealing his baby from him.

Jackie has also reacted to this juvenile fight, just laughing at the two for their childish behaviour. 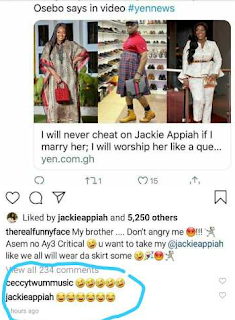 I Have Sugar Mummy and We’re Happy Together – Joeboy