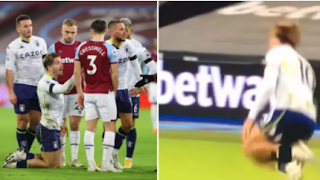 Jack Grealish was accused of an ’embarrassing’ dive during Aston Villa’s 2-1 loss against West Ham on Monday night.

Once again most people were left talking about VAR after West Ham’s win, with Ollie Watkins late equaliser ruled out by the video officials by the barest of all margins.

However, Grealish, who scored Villa’s equaliser before Jarrod Bowen’s winner, was also at the centre of some controversy, which spilled out into the manager’s technical areas.

In the second half the England international won a free-kick after a clash with Pablo Fornals, but the 25-year-old’s delayed reaction caused outrage from fans on Twitter.

There was tension between the two benches during the game as well, with both assistant managers getting booked for an argument, that it seems was to do with the dive.

Speaking on Monday Night Football after the game, Dean Smith said, “One of their members of staff was calling Jack a ‘diver’ and a ‘cheat.

“I wouldn’t say anything about opposition players and I wouldn’t expect any of my staff members to say it either.

“So, I spoke to David and he said he will deal with it.”

Speaking on BBC 5 Live, former West Ham defender Matthew Upson agreed with whatever it was the Hammers’ bench had said, saying, “It’s hard to see how the referee hasn’t read the script on that one, isn’t it?

“We could see it here and we are a fair distance away.

“Jack Grealish waited for the contact and literally just dived on the floor.

“Coufal did nothing running alongside him.

“I can see Grealish having a cheeky little chuckle to himself and happy with the free-kick he has just won.”

These Are The Cutest Dog Breeds According To Science

Insecurity: Buhari Orders Immigration To Beef Up Security At Borders