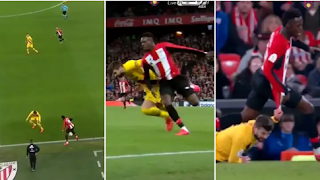 Barcelona were dumped out of the Copa del Rey by Athletic Bilbao after losing their quarter-final tie 1-0 on Thursday.

The Catalan giants conceded a last-gasp goal as Sergio Busquet scored an own goal deep into stoppage time, but the main takeaway from the cup clash was the hilarious moment between speedster Williams and defender Pique.

In the 72nd minute, Williams squared up Pique then easily sprinted past the Spaniard who dragged the forward down to the floor after pulling his shirt.

One user wrote: “The best bit about this was Inaki Williams kept going and was dragging Pique with him for a couple yards before he finally went down.”

A second tweeted: “Pique got dusted and was holding onto Inaki Williams’ shirt like his life depended on it.”

A third added: “In all fairness to Pique, Inaki Williams is ridiculously fast. Like, Usain Bolt levels of pace. Still kind of embarrassing.”

Pique received a yellow card for his troubles and appeared to suffer an injury as he was substituted nine minutes later.

Williams, meanwhile, continued to troll Pique after the game. Speaking to reporters, he said: “I saw Pique having problems and told my teammates to pass me the ball closer to him.”

Pique with the most professional foul you will ever see. Actually did quite well to haul down Inaki Williams then.

Protesters Are The “Vaccine” To The “Virus” Of Racism- World Heavyweight Champion, Anthony Joshua Hits Out

Giggs explains why Ighalo is different from other Manchester United players

Protesters Are The “Vaccine” To The “Virus” Of Racism- World Heavyweight Champion, Anthony Joshua Hits Out

Giggs explains why Ighalo is different from other Manchester United players