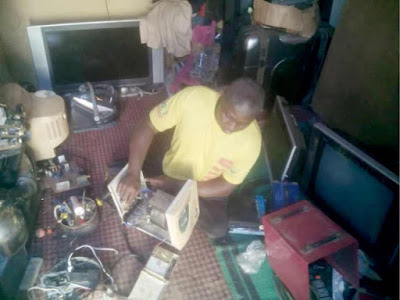 Shehu Ibrahim Musa has been fixing electrical appliances since 1998 after he graduated from secondary school. Though a physically challenged resulting from poliomyelitis, Shehu is undeterred by his physical disability and social challenges. He works from his mud house in Mai Adiko area of Rayfield in Jos south and says fixing appliances is a gift he inherited from his father. “I fix all electronics such as TV, fans, radios and other electric appliances but I don’t fix phones,” he told Benue/Plateau Trust. “After completing my education at Government College Zawan, in Jos South, I didn’t go further. I started to fix appliances because it was something my father did. He did not get any formal training on the skill, he was a taxi driver by profession but had the gift of fixing things,” he further stated.

Like his father, Shehu also has the gift and attracts customers from many parts of the city including Dilimi in Jos North. By watching his father, Shehu said, he started by fixing a small transistor radio. Though it was not something he took seriously at that time, he said the skill has now become his lifeline. However, with the internet serving as the window to the world, Shehu told our correspondent that he was working towards modernising his skill by becoming technologically savvy.

“I do a lot of research online to find ways of fixing modern appliances. That was how I learnt to fix LCD television sets. When I need to buy a particular sparepart, I sometimes go online to find what I’m looking for and read about it while other times I work with other friends in the same line of business to find ways of solving a problem.” The phone Shehu uses, however, is quite old and barely serves his purpose. “Sometimes I have to borrow a phone from someone to browse the internet because mine barely has the capacity for the kind of research I do. It would have been much easier if I had a computer but for now, I rely mostly on borrowed phones.”

So far, none of Shehu’s seven children have shown interest in following in his footstep but he says it doesn’t bother him as they have all been enrolled in school. He has, however, trained about four apprentices who now operate independently and have advanced to fixing electrical problems on heavy duty machines such as caterpillars while another has moved to fixing phones. The father of seven said the business has not been as lucrative as it once was and he fears that they may soon be out of business. “In 1998, when I started, we were few who had the skill but there are now a lot of people who are using advanced technology.

You will also notice that some equipment such as engines now come sealed, so how are you expected to fix it if you are not also technologically advanced.” Like any small scale business owner, Shehu says his challenges are mainly funds and power supply. He expressed disappointment that his likes have not benefitted from government social investment programmes. “I would love to be able to sell some appliances and spareparts instead of just fixing appliances but this has not been possible. Even the assistance other people get from government, I have never benefitted. There was a time they were disbursing N10, 000 but after seeing me, the people said we were not part of it and it baffled me that we are being excluded despite our circumstances.”

Shehu, however, advised against street begging but stressed that government must also play its role by protecting and assisting the challenged and the poor. “I have never been to the street to beg. It weakens one’s resolve and robs you of your dignity. I am not defined by my disability and my advice to any physically challenged person is to learn a skill or trade but begging is definitely not the answer,” he said.