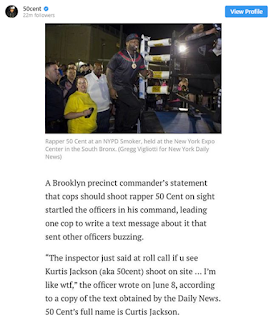 American rapper and actor 50 Cent claims he has been living in fear following an alleged death threat from a New York police commander.

Curtis Jackson, better known as 50 Cent, took to his social media to share the death threat story with his Instagram followers.

The ‘candy shop’ hitmaker spoke out after reports from the New York Police Department said they are investigating claims a commander allegedly threatened the star by telling members of his force to shoot him on site.

According to New York Daily News newspaper – deputy inspector Emanuel Gonzalez made the comment during a roll call, but it’s said he meant it as a joke.

An NYPD spokesman confirmed that the incident is under review, and investigations into deputy inspector Emanuel Gonzalez reckless remarks continue on.

Despite all the drama going on in his life, 50 Cent seems to have taken a break from the police threat to take a jab at “Gay Tupac” Jussie Smollett. 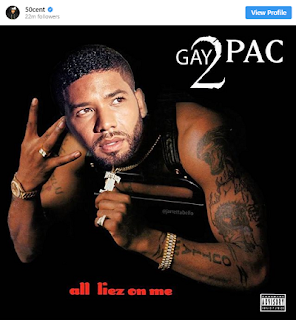 Today, the ‘In da club’ hitmaker took a slight at Empire star after investigations revealed that he may have orchestrated the hate crime attack.

Sarcastically, 50 noted that we live in a different era where homosexuals should not be stigmatised.

Osinbajo Donates N1million For the Treatment Of Baba Suwe

Behind The Scene Photos Of Falz ‘Moral Instruction’ Video

Arsenal rejects a bid from championship outfit Brentford for young striker Folarin Balogun. Arsenal is reported to have turned down…

The Church of England has said that sex is for straight married couples only, while declaring that Christians in gay…