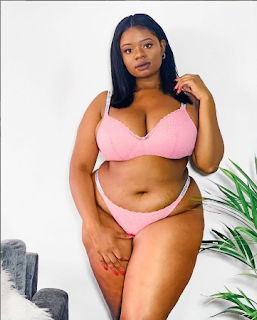 Social media influencer and businesswoman Thickleeyonce is all about body positivity and doesn’t see a problem with sagging boobs.

The influencer shared her reasons behind the importance of normalising sagging breasts after her teen cousin was body-shamed recently.

She took to Twitter to express her frustration at people who constantly judge other women for the way their boobs looked.

As many rushed to support her views, a tweep posted a question asking how saggy boobs were not considered normal when they were natural.

To which Thickleeyonce replied, saying that sagging breasts were indeed natural and that people needed to stop passing negative comments about them.

She also recounted a time when she had to fight with an older person after they made nasty remarks about her teenage cousin’s breasts.

“Exactly my point. They’re natural boobs but people got all kinds of nasty things about them. I had to fight an adult for telling one of my teen cousins that her boobs look like that of someone who had 3 kids. People do this and it’s honestly so unnecessary and ugly.” 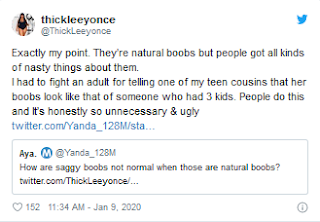 See The Extreme Height Difference Between This Basketballer And His Girlfriend