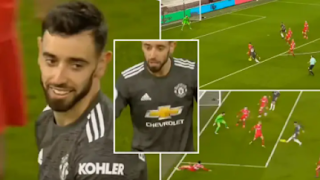 Highlights of Bruno Fernandes’ performance for Manchester United vs Liverpool have emerged and it could be his worst performance in a Red Devils shirt.

The Portuguese superstar has been United’s star man since arriving last January and many expected him to be on top form once again.

But he never settled at Anfield and lost possession 19 times throughout the game, before being replaced by Mason Greenwood in the 89th minute.

One fan decided to compile Fernandes’ ‘best bits’ in the game and it’s hard to watch.

Fernandes has scored 11 goals and provided 7 assists in the Premier League this season, without taking much of a rest.

Manager Ole Gunnar Solskjaer told Sky Sports the decision to sub him off was a ‘tactical’ one to conserve his energy.

‘It was a tactical decision,” he begun per Metro. “Bruno has obviously been running his socks off for us every single game since he’s come. He’s been here and been running more or less every game

“So towards the end we felt Paul [Pogba]’s physical presence in there might be a chance for us. And Mason, when he gets a chance he can score in the blink of a second.

“So it was a bit of a throw of the dice to get Mason on even though he had to defend against [Andy] Robertson.”

Solskjaer went on to admit he was ‘disappointed’ with United not extending their lead at the top of the table.

“I know we can play better, but we’re still coming away from here with a point which shows how far we’ve come in a year or even six months.

“We didn’t impose ourselves on the game, especially in the first half.

“I think we grew into the game and towards the end you felt ‘yeah, it’s here for us to win’ and we created two massive chances and they were two brilliant saves by the keeper.

“I’ve got to be honest to say I’m a bit disappointed at the moment, but still you know you’re playing against a fantastic team and they had more of the possession.

“But still you want to go here and you know the injuries they’ve had lately, you think you go here and get a result. We didn’t, but a point might be okay if we win the next one.”