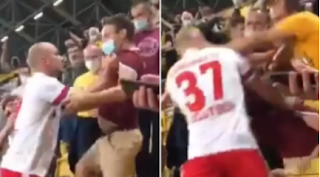 Dresden beat Hamburg 4-1 in the German Cup in front of a crowd with 10,053 fans in attendance – the biggest in Germany since the lockdown started in March.

But the match was marred by Leistner’s moment of madness when he climbed into the stands to attack an opposing supporter.

The 30-year-old broke from an interview and marched his way to the fan who was apparently abusing him during the game.

He grabbed the fan then pushed him onto the floor. Supporters around him intervened before security ushered him back to the field of play.

Leistner, who used to play for Dresden, has since apologised on social media as he revealed that he was provoked by the home end.

“After the match in my hometown, I was verbally abused from the stands,” he wrote on Instagram.

“I can usually cope with it. But this was extremely and massively below the belt, against my family, my wife and my daughter.

“That’s when I lost it, even more so because it was already an extremely emotional match for me.”

He added: “Regardless, this should have never happened to me. I am a father who wants to serve as a role model.

“I apologise in all forms and can only promise that – no matter what insults are thrown my way – this will never happen again.”