Home > Lifestyle > Groom walks out of wedding in Jos, says he planned to disgrace bride 10 years ago

Groom walks out of wedding in Jos, says he planned to disgrace bride 10 years ago 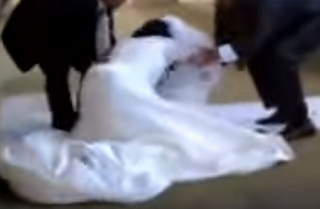 A dramatic scene was recorded in Jos on Saturday March 21, as a groom identified as Mr Rufus Aplang walked out of his wedding ceremony, abandoning his bride identified simply as Judith.

The incident reportedly occurred at God’s Glory Ministry in Jos when it was time for the couple to exchange their vows. It was gathered that before walking out on his bride, Aplang disclosed that he has been planning to disgrace her for 10 years.

The bride collapsed after the incident and was rushed to a private hospital around Plateau State Polytechnic.

Aplang’s best man, Peter Sani who disclosed that the couple dated for 12 years before deciding to get married, attributed his friend’s behaviour to some sort of diabolism.

Wedding Without the Bride: 20 Years Later…